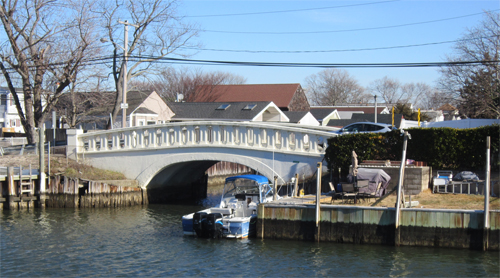 Subscribe to receive the latest project updates via email

August 2019: Both bridges are now open to two-way traffic. We thank you for your patience throughout the construction.

January 8, 2019: Setting of the concrete arches on East Riviera is scheduled for January 9, 2019. This action will cause additional delays at the bridge on January 9th due to the size of the arches that must will be repositioned. These delays are unavoidable. We have coordinated with the schools to mitigate impacts to school buses. We strongly recommend that you provide additional time to arrive at your destination on January 9th.

High winds are forecast for this date which could cause this operation to be rescheduled to January 10th.

October 23, 2018: Preparation on West Riviera will begin for placement of precast concrete arch units. Setting of the concrete arches on West Riviera is scheduled for October 30th. This action will cause additional delays at the bridges on October 30th due to the size of the arches that must will be re-positioned. These delays are unavoidable. We have coordinated with the schools to mitigate impacts to school buses. We strongly recommend that you provide additional time to arrive at your destination on October 30th.

August 13, 2018: Removal of the West Riviera substructure will begin today.

Water and gas relocations onto the East Riviera utility bridge are scheduled to begin this week.

Installation of cast in place piles for the West Riviera bridge will begin late this week or early next week.

July 27, 2018: Demolition of the existing West Riviera structure is ongoing. 90% of the superstructure has been removed.

Steel sheeting for the west cofferdams is scheduled to arrive next week. Installation should be ongoing through the coming weeks.

Removal of the substructure will begin after the completion of the cofferdams.
July 13, 2018:

Anticipated work
Temporary water work is estimated to be completed on West Riviera on July 19th.

The temporary pedestrian bridge on West Riviera should be opened on July 20th.

Demolition of the existing West Riviera structure is scheduled to begin on July 23rd.

Installation of the temporary utility/pedestrian bridge on East Riviera should begin the week of July 23rd.

May 11, 2018: It is anticipated that temporary bridge sections on East Riviera will be placed between May 17th and 25th.
Upon completion of overhead utility relocation work on West Riviera the construction of temporary pedestrian/utility bridge will begin.

April 27, 2018: PSE & G and Verizon have begun their utility relocations on West Riviera. It is anticipated that all overhead utility operations will be completed mid-May.

Work will begin on the substructure of the East Riviera vehicle bridge on Monday April 30th.
Concrete abutments will be installed the end of next week or the beginning of the next week.
Temporary bridge installation on East Riviera should be around the middle of the month.
Upon completion of overhead utility relocation work on West Riviera the construction of temporary pedestrian/utility bridge will begin.

April 27, 2018: Over the past two weeks the Town has received many complaints from residents of the area and workers at the construction site. These complaints are associated with delays passing through the construction zone. Please understand that the work zone is very tight. Due to limited work and storage areas, the contractor is forced to move materials and equipment in and out of the work zone throughout the day. These impacts are especially acute during startup and shut down times. These actions cause temporary interruptions to those seeking to cross the bridges. These interruptions and delays cannot be prevented and will continue for the duration of the project. It is strongly suggested that extra time be allotted to reach your destination, especially during busy commuter times for work and school. The Town and contractor are aware of the inconveniences this project is imposing on the host community and are diligently attempting to minimize those incidents. Your continued cooperation, understanding and patience is requested while we undertake this public works project that will ultimately improve access to your community.

March 30, 2018: The barge is scheduled to be removed from the site during the week of April 2.

Survey layout of the temporary traffic signals on East Riviera has been completed. Utility mark out from Verizon and PSE&G are pending. Both requested extensions of time for completion of their mark outs. Upon completion of mark outs temporary signal work will be scheduled.

Construction signs for East Riviera are on hand and will be installed in the coming weeks.

East Riviera temporary traffic signals are anticipated to be installed in mid-April.

February 15, 2018: During the week of the February 19th, cofferdam work and work for the temporary roadway will continue. PSEG will begin utility work. Temporary bridge should arrive on site late in the week.

February 9, 2018: Earthwork and sub base installation for the temporary bridge approaches have been completed. Steel sheeting is on hand and pipe piles are expected to be delivered shortly. The barge is expected to arrive Sunday. Sheeting piles and pipes are scheduled to be installed next week (Feb. 12th).

January 17, 2018: On Friday January 19th the Reconstruction of the American Venice Bridges will begin. The bridge on West Riviera Drive will be reconstructed first. Traffic will be restricted to a single lane and will be controlled by traffic signals. West Lido Boulevard Promenade and West Santa Barbara Road will be closed at West Riviera Drive. Detours will be established for these closed intersections. It is estimated that reconstruction will be completed by the fall and two lane traffic restored. The new structure will have wider travel lanes and a 5 foot 6 inch sidewalk.

January 3, 2018: Due to extremely cold temperatures, there will be either no or very limited construction activities this week. The forecast for the following week, January 8th, is expected to moderate and work on tree removal and environmental protection is scheduled. Thank you.

November 2017: The project is continuing on schedule. This week, Hinck Electrical will be on-site to complete preparation work and install the wood poles for the temporary traffic signals on West Riviera Drive. Thank you.

October 2017: Please be advised that surveying for the American Venice Bridge Project is scheduled to begin tomorrow, Friday, October 20th. Prepare for workers to be in the area and please be sure to drive carefully.

September 2017: The American Venice Bridge project is proceeding very close to schedule. We have awarded the construction bid and have received the letter to proceed. The contractor will replace the west bridge first. Over the next few weeks you will notice survey crews in the neighborhood associated with this project.

April 2017: Project remains on schedule. Final design plans received. All permits (Army Corp. still pending) anticipated by end of May 2017. Procurement process for construction contractor to be initiated April 2017; if procurement proceeds as scheduled, a construction contractor would be selected by end of May 2017. Anticipated initiation of construction (mid 2017) remains unchanged from September 2016 update. The Governor's Office of Storm Recovery (GOSR) has advised the Town of Babylon that despite being one of the largest NY Rising-funded projects, this project is currently closer to implementation than virtually all other NY Rising projects.

Please note that despite our careful planning and attention to detail, once construction is initiated, the community will be subject to everyday inconveniences for an extended period of time. Thank you in advance for your continued patience and cooperation.

American Venice was created by real estate developers Victor Pisani and Isaac Meister in 1926. Unique in concept and layout, the American Venice project was designed to emulate the grand City of Canals in Venice, Italy, complete with gondolas and bridges linking the neighborhoods. Despite the modernization of homes in the area, the original East and West bridges remain today.

The American Venice Bridges currently possess a load limit of 12.5 tons, which restricts the passage of large construction equipment to the community. Over time, the passage of equipment exceeding the load limit will damage the structure of the bridges. Through grants obtained from the New York State Community Development Block Grant-Disaster Recovery Program, the Town of Babylon will reconstruct and restore the American Venice Bridges. The bridge reconstruction project would increase the load capacity of the bridges so that during future storms, residents will be able to evacuate and/or receive emergency services more easily.

Has there been any previous work conducted on the bridges?
-Yes, the bridges were reinforced during the 1970s to accomodate the construction of the Southwest Sewer District. Maintainence work was also performed in the mid 1980s.

Has this project received approval?
-Yes, the project was included within the Copiague/Amityville community reconstruction plan prepared by a committee of residents and civic leaders. The project was identified by this committee as a "resiliency project" to be funded through New York Rising, a state-sanctioned community recovery program. Being that the bridges are the only means of access to this community, they are considered vital to the community's continued existence.

When will the work be started?
-Work is already underway with survey crews collecting data to be used by LKB Engineering to design the project. It is anticipated that the design phase will be completed in 2016, with construction beginning in 2017.

Will the bridge walkways remain?
-Yes, a sidewalk will be incorporated into the bridges' design.

Will the bridge dimensions remain the same?
-The proposed bridge will be approximately 35 feet wide, compared to the current width of 28.5 feet. The height and length of the bridges will remain the same.